Grateful for my family and furry friends who are keeping me company during social distancing #stayhome #staysafe #staystrong
Queen City Open Champion!! 🥇🥳 . . I had an amazing week in Regina! The @sask_squash committee and community hosted a well organized and very welcoming event! Extremely happy to overcome new challenges and to back up last week’s win in Calgary. I pushed myself mentally and gave each match everything I had physically. . . Very grateful for everyone who has supported me and helped me reach this goal! Big shout out to my billets Diana and Jim for taking care of me this week, and to my team: @abdelmeguido @thehumanfuse @myohabituation @jhills1971 @karimaly9051 @ianpower6570 David Paskevich, Racquet Central @gearbox_racquetball @teutonsports
Calgary Women’s CFO Consulting Champion! My 4th and biggest PSA title!! . . So special to win this title at home with my family, team, friends, and squash community. I am so grateful for all the support this week!! . . Huge thanks to my Calgary team: @jhills1971 and @ianpower6570 for coaching me this week and getting me through some tough matches, @thehumanfuse for years of training and guidance, David Paskevich for improving my mental game and helping me find new tools to succeed, and @myohabituation for always keeping my body in the best condition possible! To my Cairo team: @abdelmeguido and @karimaly9051: I’ve grown so much with both of your help and I’m excited to keep up the hard work! Thank you to my private sponsors, as well as @gearbox_racquetball (squash), @teutonsports and Racquet Central! Huge thanks to my family and friends for all their love and support! Thank you to all the sponsors and committee members who put on such a great tournament! #pushedmylimits #danzilla #psachallengertour #internationalwomensday
✌🏼 Chicago! —> Next stop: Calgary for the Women’s Week PSA at the Winter Club! Hometown tourney!!
Couldn’t find my groove today. Tried really hard but couldn’t find any rhythm, touch, or momentum. Definitely disappointed but not discouraged. Prime time to learn from my mistakes and try to improve for next time. @windycityopen @psaworldtour 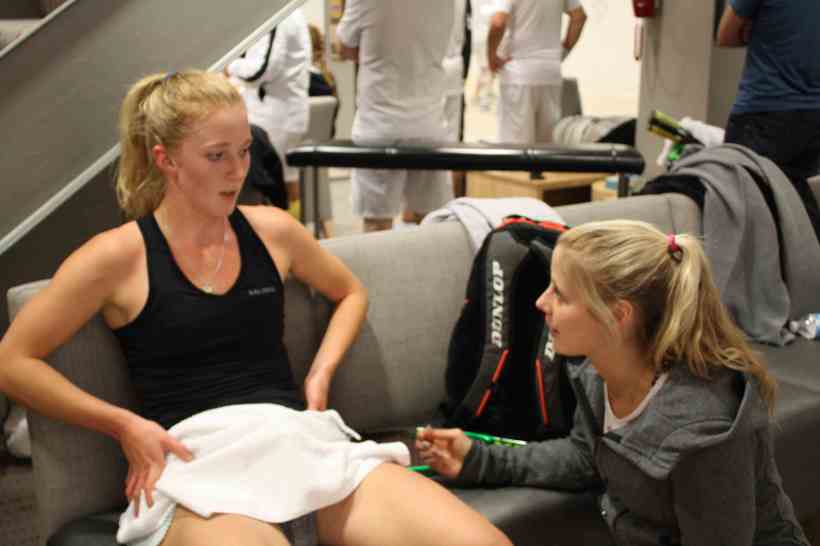 After spending a week in Florida, taking a week off squash, I arrived in New York excited to play and compete in the Carol Weymuller Open. Even though I hadn’t touched a racket or even thought about squash in a week, I was confident that I was going to play well and that my decision to take a mental break was what I needed.

My first round of qualifying was against Mariam Metwally, a young but strong Egyptian, who is currently ranked 21 in the world. While the first two games were close, I unfortunately dug myself into a hole and was down 2-0. In the third game, we battled deep into extra points where I won 16-14. We had long, dynamic rallies in the first three games, but in the fourth game she stopped running and resorted to shooting which allowed me to tie up the match. I knew that she would come out stronger in the fifth game, but I didn’t adjust my game plan back to what was originally working. I was shooting a little too early and found myself down 9-3. Fortunately, I refocused and worked my way back to 9-10 by hitting deep, tight length and keeping the ball in play. Unfortunately, I fell one point short in my comeback effort and lost the match 11-9 in the fifth.

Even though I didn’t get the result I wanted, it was the first time in a while where I was relaxed, focused on process, and enjoying myself on court. After this match, I felt confident and carried this same mindset into the Granite Open in Toronto.

I spent four days training in Toronto before the tournament started. Normally I don’t like to spend that much time in one place before an event because I tend to over think, but in this case, arriving early really allowed me to adjust to the colder court and the 19” tin.

My first round match was against Haley Mendez (USA, ranked 51). I played her once before in April in Charlottesville and won 3-0. I was a little nervous going into this match because I had trained with her a couple weeks prior to this event and knew she had improved her game. In the first game we exchanged points until 6-6, but then I started to settle in because I felt my movement and attacking shots were working. I pulled away in the first gaining a 1-0 lead, then I kept the momentum and won the next two games comfortably.

In the quarterfinals I played Millie Tomlinson (ENG, ranked #22). Millie and I have played countless times throughout university and once on the PSA circuit. I had a clear game plan going into the match of what I wanted to do. The first game was close, but I lost it 12-10. In the second game I was distracted by things outside my control and I lost 11-4. It was frustrating but I managed to regroup for the third and fourth games, where I managed to sneak out on top, pushing us to a fifth set. Similar to my match in New York, I dug myself into a big hole that I almost climbed out of, only to lose 11-7. It was frustrating being so close and losing, but I was still happy with how I played and how I was able to stick to my mental processes.

After being away for 6 weeks, I was very happy to return back to Calgary. Since being home I have spent time with family and friends, and working on my fitness and various aspects of my game.

Thank you Linda & Jess for organizing and running these two events. Always appreciate the work you put in to ensure the tournaments run smoothly and that all the players are taken care of.

Huge thank you to the Dietz’ and Lolly for hosting me during these two events!

Thank you Nicole, Hollie, Nikki & Catalina for coaching me during my various matches!

All quarterfinal matches are shown above, with my match starting around the 54 minute mark.